Honey, Toxicity, and Intoxication: A 40,000 Year History of Mead in Southern Africa?

In this presentation, Neil Rusch draws on the archaeological record in support of a long-term chronology involving bees and cognitive development. A deep time perspective also accounts for the occurrence of bees in the ethnography, rock paintings and mythology of the region.

by Neil Rusch
Honey, Toxicity, and Intoxication: A 40,000 Year History of Mead in Southern Africa?
·

Editors note: This publication contains the video of the talk from the Fermentology webinar series, as well as a lightly edited transcript of the lecture. The transcript has been enriched with media, annotations, and links to other material by the digital publication team in order to amplify and extend the content for a reading experience.

Three ingredients exist inside any honeybee hive, wild or domesticated – yeast, beebread (transformed floral pollen) and honey (fructose and glucose). If combined with water, these ingredients produce alcohol. Success depends on an accumulation of pharmacological knowledge, keen observation and an astute but flexible cognitive ability. Archaeological evidence from Border Cave, South Africa suggests that honey bee products were being used and consumed by early people 40,000 years ago. In this presentation, Neil Rusch draws on the archaeological record in support of a long-term chronology involving bees and cognitive development. This better explains the early appearance of intentional fermentation. A deep time perspective also accounts for the occurrence of bees in the ethnography, rock paintings and mythology of the region.

In this presentation I intend making a link between bow hunting and intoxication. In doing so I hope to demonstrate that beneath the nominalism of naming, there's a much deeper connection than the lexical association.

First, let's remind ourselves what we find in a beehive.1 Honeybees were part of the Paleoscape since before the advent of Homo sapiens. Honey was surely a catalyst, allowing first fermentation to happen when modern humans arrived on the scene.

Three ingredients exist inside any honeybee hive, wild or domesticated:

Given the right conditions, if these three ingredients are combined with water, they produce alcohol.

Alcohol can be discovered accidentally in the wild and then opportunistically exploited. For example, in Southern Angola, !Xun-speaking San-Bushmen seek out bee hives in Baobab trees that have been inundated by rain. The bees abscond, leaving behind a cache of honey-alcohol in the tree cavities. We can assume that discovering these naturally occurring fermentations then led to the earliest fermentation attempts.

Researchers have highlighted the nutritional importance of honey in paleo diets and for human evolution. It seems to be accepted that alcohol is a sure sign for evolving social behavior.

Likewise, the intentional use of fermentation is a marker for human cognitive development. Therefore, there are basically two areas of research :

One problem is that there is a vast time gap between the “drunken monkey” and the appearance of containers in the archaeological record. Organic containers don’t survive 25 to 50, 000 years. In other words, organic containers that may have provided traces of alcohol are erased from the record.

The earliest evidence of honeybee exploitation anywhere was excavated at Border Cave, which is on the border between South Africa and Eswatini.2

This beeswax provides proof that at 40,000 years ago, there was knowledge about bees — and that bee products were being used and consumed. Therefore, the research question really is: Could controlled fermentation have occurred in southern Africa 25,000  to 50,000 years ago? What evidence could there be, other than containers?

With honey, we have the material ingredients to make alcohol. But what about the intangible ingredients?

In addition, a package of cognitive attributes was necessary to enact the next step: advanced planning, task switching, working memory, and so forth, were also necessary requirements.

This is compelling evidence that there was, way back then, complex cognition and fluid thinking. As such, fermentation sits comfortably within these techno-behaviors. But it leaves no archaeological trace, certainly not at the time depth we are considering here. However, much like arrow poison and compound adhesive, fermentation also requires the combination of several substances to produce a novel product.

As an example, let’s consider bow hunting. Fermentation and bow hunting require similar knowledge systems. The knowledge required for bow hunting with poison tipped arrows would surely have benefited early fermentation attempts. Attributes like pharmacology and botanical know-how would have been helpful in both occupations.

The bow and arrow points excavated at Klasies River and Sibudu are delicate items. It is unlikely they could kill an antelope outright. Rather, the purpose of the projectile point is to pierce the hide of the antelope that it is shot at, and to deliver its poison load.

It's from this technology that archaeologists have deduced that poison was part of the bow hunting technology used by the people living at Klasies River and at Sibudu.

We can say that with arrow poisons and compound adhesives, fermentation combines several ingredients to produce a novel product. What this suggests is that controlled fermentation could have occurred 25,000 to 50,000 years ago in the terminal phase of the Middle Stone Age in Southern Africa.3

We can say that with arrow poisons and compound adhesives, fermentation combines several ingredients to produce a novel product.

Richard Klein estimates the Out of Africa scenario. New evidence is being added, which means that the information is not fixed and is instead constantly changing. Nevertheless, Klein’s map gives a big picture. Into the picture we can situate bow hunting and fermentation at the time depth presented thus far.

We now move from archaeology and pre-history into the ethnographic and historical time-frame.

My enquiry follows a multi-proxy approach, which I consider by beginning with Seyfertt’s map. He shows the locations of honey-alcohol production across Africa as he recorded it a century ago. He also documented fermentation procedures with and without plant adjuncts.[3]

This map reflects what Europeans encountered in the 18th and 19th centuries, but it is incomplete.

My tabulation gives some of the plants used for fermentation and brewing in southern Africa, including psychoactive plants that were fermented with honey. My full tabulation is several pages long and is available by request on ResearchGate.[4]

This map represents some of the data from the previous tabulation. Seyfrett’s map is by no means a complete reflection of what African people were brewing. Yet, the data, again, brings to the fore the close association between arrow poison and fermentation.

Another proxy indicator are the KhoeSan words about bees, honey and brewing, which takes us beyond the estimate of ethno-historic time frame. Exactly how far depends on which linguist you talk to.

There’s a considerable knowledge here about bees, honey and brewing. The words come from several languages, some extinct, others terminal, some still spoken. The English language has no equivalent for many of these words.

Of course rock paintings, the painted landscape of Southern Africa, adds further evidence of a continuing preoccupation with bees. These themed paintings are recognizable in several ways:

An example are the catenary curves, representative of honey comb, attached to the belly of the eland.4

Then these too are embedded in mythology. For example, the Southern San became known as People of the Eland. And so, for People of the Eland, there would have been no eland if in the beginning the leather that was to become the eland had not been fed with honey.

Antelope, too, would not have had any color if they had not been rubbed with different honey. According to Qing’s testimony, most honey and wax are magical substances.

I believe that the theme of bees and honey in southern San mythology, pictorial expression, and languages is related to the Border Cave beeswax and the exploitation of bees by early people 40,000 years ago.

By now, it should be obvious that there are biocultural aspect to consider here. This includes the inner life of the hive. With this aerophone instrument the Xam-speaking San said they could “move bees.” In other words, there is suggestion of interspecies communication.

Now, I've replicated this instrument and we've recorded it in the sound studio. And that's what it sounds like:

The basic protocol follows information provided by the botanist Carl Thunberg. Traveling through southern Africa, he encountered KhoeSan people using these ingredients and method to make alcohol in the 18th century.

The process is simple and fast. The bees provide the ingredients. Adding water and plant additives is easy to enact. And then, within 48 hours the honey-alcohol beverage contains between 2 and 3% alcohol.

In a second phase of the experiment, Sceletium, a psychoactive plant, was used as the plant adjunct to produce a ‘spiked’ beverage called khadi.[5]

Sceletium contains alkaloids. These alkaloids are psychoactive, although they are not hallucinogenic. The mesembrine acts on brain receptors and causes serotonin re-uptake inhibition. The effect of this is improved cognition, enhanced memory, better mood, and focus.

The traditional “sweat method” enhances the alkaloids. This has been verified by two independent laboratories. Essentially the process is as follows:

The Afrikaans word for that was Kougoed. Chewing material, chewing stuff. But we do have ethnographic information which tells us that it was used also in a honey alcohol drink.

The Mind and Fermentation

So we've really been speaking about, when we speak of alcohol and fermentation, is altered states of the human mind. According to Robin Dunbar, it's been a long social affair.[6]

Altered states of the human mind are connected with fermentation and alcohol. From an evolutionary perspective, Clive Gamble uses the term “social brain.”[7] He also speaks of “a release from proximity,” or what we would call off-line thinking. [8]

The questions there are: What role did psychoactive substances play, in the release from proximity? Did alcohol and Sceletium enhance group synchronization? What about the release of endorphins?

I think all these questions are worth pursuing. In my endeavors to answer some of these questions, I’ve begun experimenting with fermenting honey-alcohol “in the rocks” as it was said to have occurred in the 1700s.

1 of 2
A Supplement to this Pub 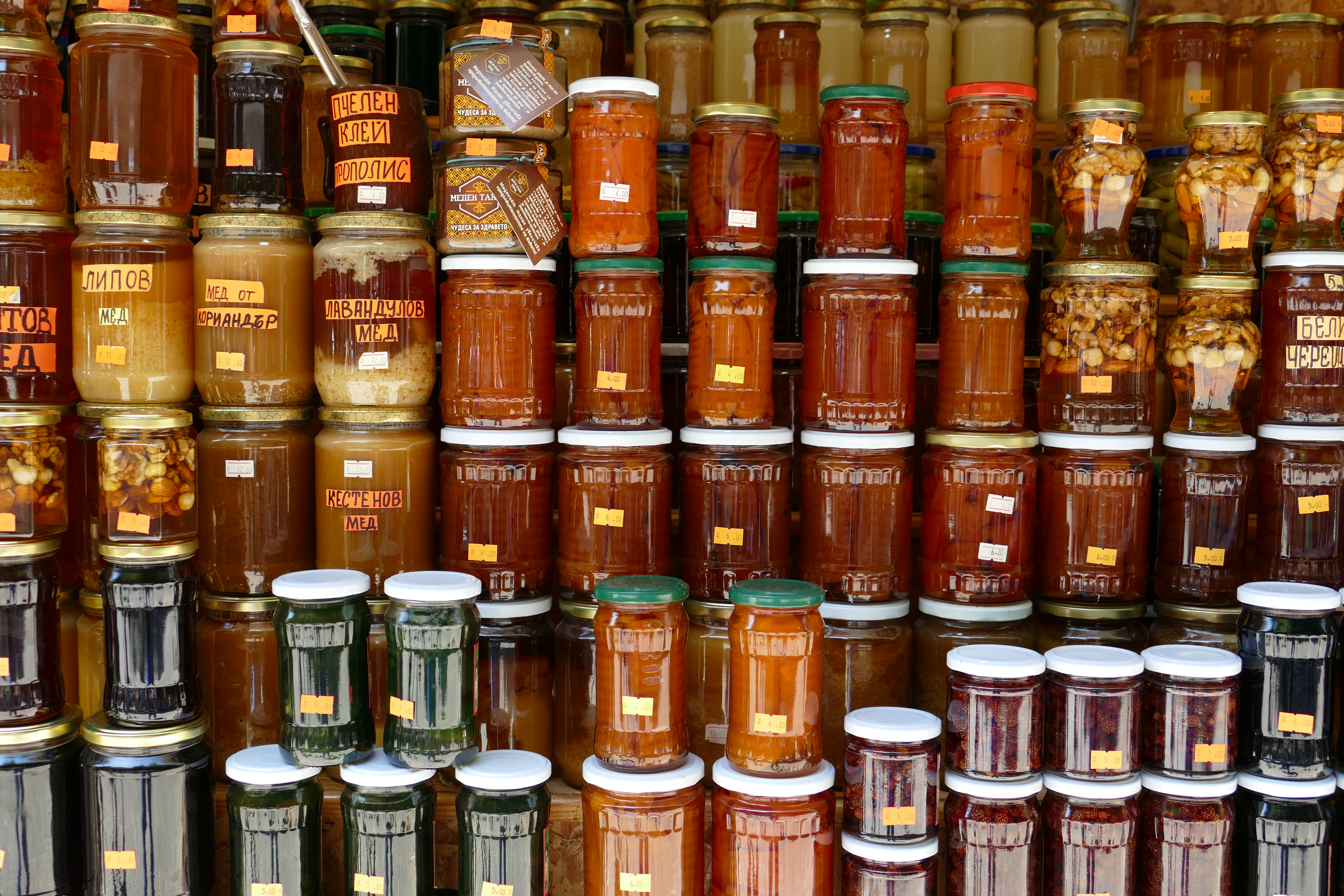