Heather Paxson answers questions about the safety of cheese.

by Heather Paxson and Michelle Jewel
The Safety of Fermented Foods: Question & Answer
·
This Pub is a Supplement to 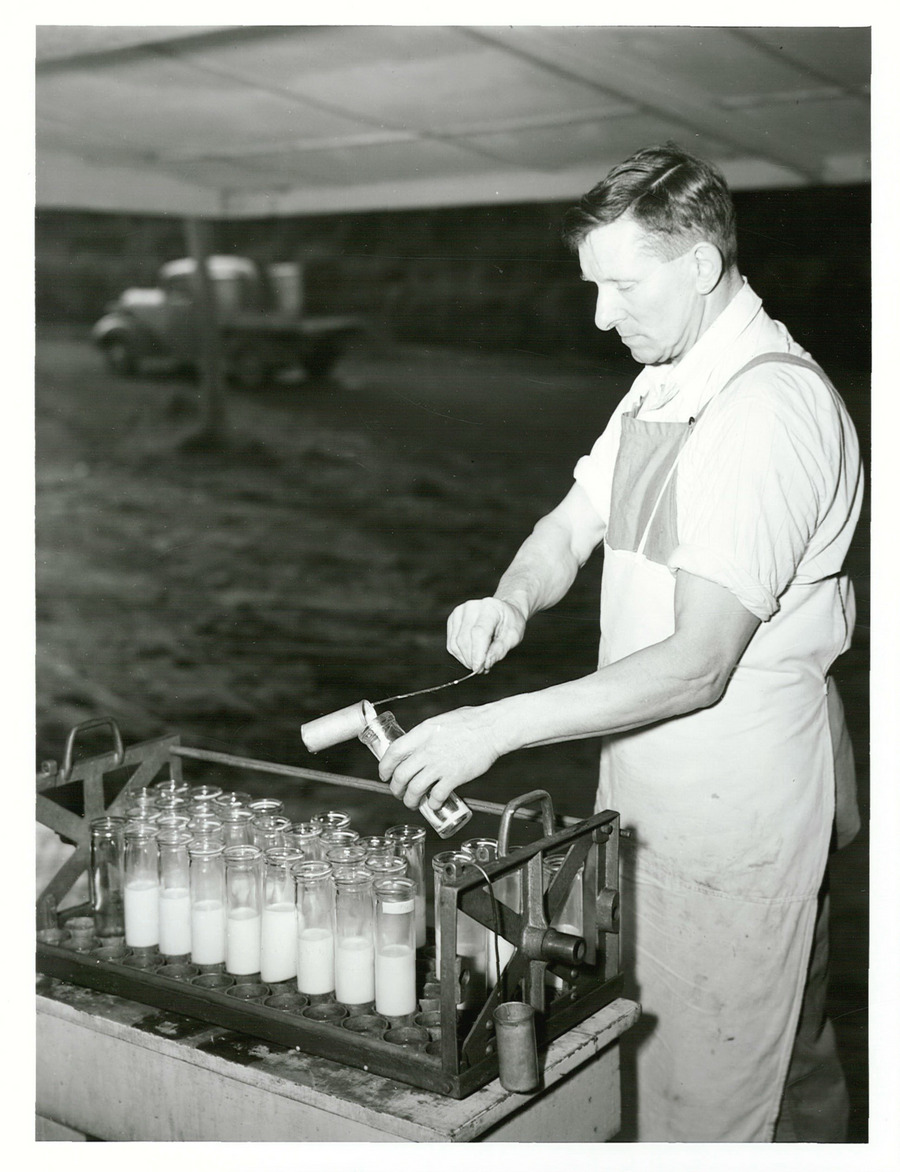 The Safety of Fermented Foods
by Heather Paxson

Image attribution: "Pulling curd is a method used to test the consistency and elasticity of curd prior to milling." Photograph by Richard Lumbers of the cheesemaking process. Community Archives, CC0. Accessed from Wikimedia Commons.

Question: I was struck by your describing the early cheesemakers as being women. And that as cheesemaking, as people wanted to make it more scientific and standardized, it was taken over by men. And that reminded me of a recent article that I read about women brewing beer, being the original beer brewers, and how that industry was also taken over by men. And I was wondering if you were aware of any parallels there?

Cheese came to the US with the Puritans, and New England was an early site of cheesemaking. And early on in the 17th century, cheese made by farm women in New England was being traded to the West Indies for rum.

So it was made to travel. The quality was about preserving milk. Cheese was really a technology for preserving milk. It was not so much the kind of gourmet treats in the way that a lot of the varieties are today. But it was very much an important part of the subsistence of a domestic farm economy — of preserving food for winter, and for trade for travel.

Question: There's a cheesemaker in Massachusetts that only heats his milk to 140 degrees, which I understand gets rid of the bad bacteria, but leaves the good ones, that is, the ones that are good for your gut. Is that true? Or is that just part of their story?

Heather: Yeah, so that's the thermalization that I mentioned. So the FDA would class that as a raw milk cheese. But you're right, that sub-pasteurization heat treatment does kill off a lot of pathogens of concern. So salmonella and E. coli that would be present in the milk before cheesemaking begins might well be knocked off from that. It's no guarantee though.

I mean, I guess this is the point that I really want to make. Neither pasteurization nor aging cheese in and of itself is sufficient to guarantee safety, which is a much more complex question of quality of the ingredients, hygiene in all the facilities, and the quality of the method used. How well the cheesemaker controlled acidity and controlled humidity so that those good microbes can actually do their job in out-competing any potential pathogens that can enter in at any time.

They can enter in through raw milk through insanitary dairy from the milking parlor and the animal, or the unhealthy animal. Tuberculosis can be passed from bovine to human through the milk. But that's not it. And the Listeria, which is one of the most prominent pathogens of concern — pasteurization is not going to affect that, nor thermalization. So it's not the end of the story. Although, it is one tool that cheesemakers have to affect microbial control.

Question: What is the difference between US raw cheesemaking and the other countries, such as France. Is Camembert subject to the 60 day rule?

Heather: Super great question. Thank you for that. Quick answer is, no. The 60 day rule is exclusive to the US. Although, Canada is similar with Quebec as a French exception. So one of the things that's interesting (I've been studying this on and off for years now) is that in the United States as there's more interest in raw milk cheeses, and more ways in which cheesemaking is not relying on pasteurization and heat treatment — in Europe, we're sort of seeing the opposite.

So in Europe, there's this long vibrant tradition of raw milk cheesemaking. And there is raw milk cheesemaking with these softer bloomy rind types that are harder to affect microbial control. But the EU, not France per se maybe, is definitely imposing more stringent microbial controls that are more in line with what the FDA does. So they're kind of meeting in the middle.

But in Europe, it's not just a matter of a uniform. They don't have a one-size-fits-all model of safety controls the way they have in the US. So part of the safety controls are organized through the main protections, the AOC in France, the DOP. So Camembert de Normandy, to have the name Camembert de Normandy has to be made in Normandy with certain kinds of breed of cows, and all this kind of stuff, but also with raw milk. That's the only rule.

But most Camembert in France is with pasteurized milk now. That wouldn't have been the case three years ago. I don't know actually exactly which decade that would have switched. I think it's only 5% of Camembert in France now is made with raw milk. And that's the AOC Camembert de Normandy. So it's very complicated in the EU because of the name controls, meeting the codex safety controls, and a whole complicated set of negotiations there.

Question: What should the consumer look for when purchasing artisanal cheese? I have a colleague whose wife is an artisanal goat cheese crafter — and they had to go through a permitting and inspection process.

Heather: The legal sale of cheese is highly regulated. Or rather, what I should say is what's regulated are the physical plants where cheeses are produced. So a creamery has to be licensed. It has to buy milk from a licensed dairy — or produce the milk themselves. If you buy a cheese in the store or in a farmer's market, you can be confident that the facilities are inspected.

Wisconsin is the only state in the country that kind of regulates the skill of its cheesemakers. So in Wisconsin, which of course, has this very rich history of cheesemaking there — cheesemaking is a profession. And there's a certification process. To be a master cheesemaker, you have to be certified, take tests, and things like this. Everywhere else, it's not the cheesemaker who's certified — it's only the facilities where the cheese is produced.

What you should look for depends on what kind of cheese you're talking about. Yeah, so if you're shopping at a farmers market, you can talk to the farmer, the producer, or the person responsible for representing them and ask questions and maybe learn how long they've been doing it. You can certainly ask whether they pasteurized or not if that's of concern to you — or of interest. But I think the longer somebody has been producing, that might give you some certainty.

I think in the before times, before the pandemic times, I would say the best way to buy cheese is to taste it before you buy it. Many of the cheeses I'm talking about, not all of them, they're pretty pricey, right? And that's because of the labor and the small economies scale. But even with places like Whole Foods, there are opportunities to sample the cheese before you buy it. So that's always a good way to do it too.

Question: You mentioned that the pH of feta increases with age. Does storing the feta in brine eliminate the risk of listeria, or other pathogenic microbial contamination?

Heather: So brine is salt, right? And salt is an anti-microbial agent too. If it's well kept at a cool temperature in the brine, it can last pretty well. I think feta is pretty safe. But I'm not a microbiologist. Always a disclaimer.