Charles Ludington, a historian of both wine and cheese, teams up with Ann-Sophie Barwich to answer questions on wine.

Tasting the History of Wine: Question & Answer
·
This Pub is a Supplement to 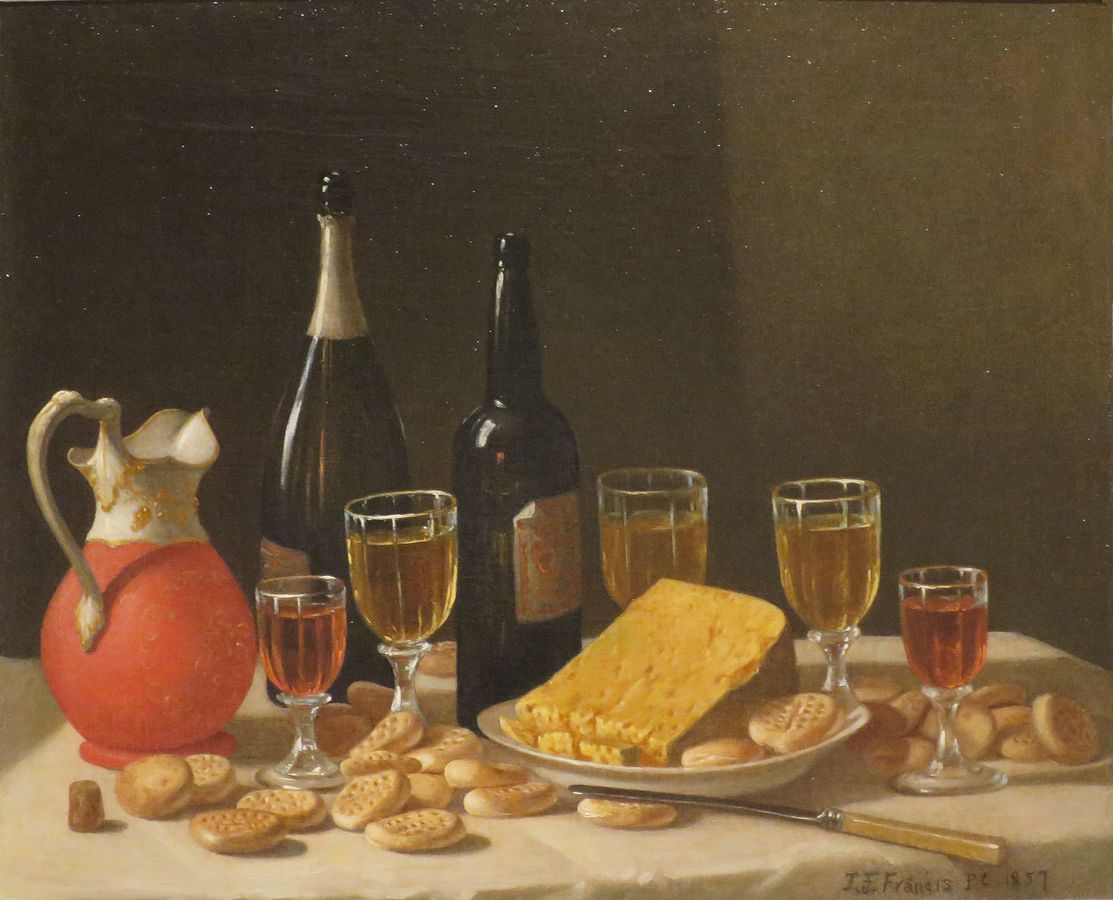 Question: What about the consequence, right? So once you become this really athletically brained wine taster, what about that consequence that you can ruin the appreciation of wines, that maybe you thought tasted good before, but now you realize weren't actually that great. And you can't go back to the box wine, once you leave it.

Ann-Sophie: I'm afraid that is true. That actually happened to me. I remember when I did an interview with a winemaker, and she gave me one of her best wines to taste. A wine I couldn't have possibly afforded in my kind of, lower budget, where a bottle was like, $500. And I had a little bit to taste. It was so divine. It was divine! And then, a week later, I bought myself a wine. I was sitting in front of it, I was like, meh. So it happens, I'm afraid. There is a price to pay for quality. Namely, it's hard to go back to certain kinds of wine that you thought previously, fair enough. And now you think, yeah, but not really.

Chad: I remember working in wine stores, I used to work with customers. And over the months that would go by, I'd sort of start them with-- if they came in, and this was back in the 90s. And so a lot of customers would say, Oh, I like white Zinfandel. And I would say, OK, we offer some white Zinfandels. And then once they, sort of, trusted me, I would say, well, if you like white Zinfandel, maybe you want to try this. And I would lead them to a sort of a buttery, California Chardonnay. And then they'd come back and say, Oh, I really like that. And then maybe another month, month and a half later, I'd say, well, why don't you try this. And I'd lead them to, at that point, a big, kind of Merlot, which still had a lot of the fruit qualities that they wanted. But what you would see over time was a gravitation towards more complex wines. I would argue, things that were not simply sweet. And then, so once you've had other more complex flavors, then it gets tough to go back to white Zinfandel, for example.

Sometimes, also memory has a lot to do with it. You might be on a vacation somewhere, say in southern Italy and you're drinking this wine that's just wonderful because you happen to be looking out at the Mediterranean Sea. And the food you're eating is wonderful. And the wine costs a pittance. And then you get home, and you try to find that same wine. And you think, Jeez, that wasn't very good. So the location mattered dramatically in making the wine. So there's so much that goes on in tasting it, and appreciating wine.

Question: Do either of you have a favorite type of wine? And do you have a justification to back it up?

Ann-Sophie: Sforzato. Sforzato is a beautiful, northern Italian red wine. And it's made from dried grapes. This is why it's sforzato with force. And it has such a beautiful, velvety feeling to it. And it's got blackberries, and tobacco, and leather. And it just develops so nicely. I mean, Sforzato, it's not perhaps the cheapest wine. But it is divine.

Chad: Yeah. I like Amarone as well. Although, the problem for me these days, is Amarone is usually about 15 to 16% alcohol. So you can only have a glass before you have to go. Or not have any more. Or you can have a big night, I guess. But yeah. It's a wonderful wine. For me, there are many wines I like. But I think, over time, I've sort of gravitated towards-- it's sort of cliche, but Bordeaux and Burgundy. In part because I lived in Bordeaux a few years ago, researching the book that I'm writing now. And I got a little bit tired of the Bordeaux because that was just all around. I was Bordeauxed out. I became Bord-eaux.

Chad: So now, I guess, I'm preferring Burgundys, which is made of Pinot Noir. But Burgundy can be very frustrating because often it's not very ripe. It can be thin and acidic. And the problem with Burgundy is you often spend a lot of money on bottles that aren't very good, just to get to that one, elusive bottle that is really good. And then each time you have that bottle, it's really good, and you think, I'm going to have this again. But the next five bottles you have are misses, they're not a hit. And so Burgundy can be more frustrating.

Question: And what is the relationship between age and "good wine"? Is it always the case, where an older wine is always going to be your better bet? Versus a newer wine? And why is that, or why not?

Chad: Age does not always help. Certainly in the case of white wines. Most white wines are made to be consumed quite young. Historically, the ones I was talking about the Middle Ages, those were meant to be consumed within the year because they would become oxidized or acidified. So you didn't want any of those things. Age can matter, especially for red wines. Although, some whites, certainly sweet white wines, can age a very long time and often do change, and become more complex over time. But so, age can matter, especially if a wine is made with a lot of tannins. At the outset, those tannins, the things that grip your mouth, they have to calm down. And they do calm down over time. So if it's a tannic wine to begin with, age can matter. But it has to then match up with the amount of fruit that's in the wine. If you wait for the tannins to calm down, and the fruit is dead, then the wine isn't very good. So age matters, especially in Bordeaux. In that way, it's sort of an old fashioned product because it's not made for a market that wants immediate gratification. New world wines, California wines, are better for drinking young, especially because they're more fruit forward. But some of them can age too.

That said, there's a part of aging that is exaggerated, or that is a social component. For example, in a cultural component. So for example, I just said that this is a 2011 Bordeaux. It's not very fancy. It's mostly Cab. It's 60% Cab, 30% Merlot, 7% Cabernet Franc, 3% Petit Verdot, so a good Bordeaux blend. But it's not a fancy wine, and that blend is typical. But what's not fancy about it is the grade of it. It's a Crus Bourgeois. So, a middle class wine, they come out and tell you. 2011 for Crus Bourgeois, is 10 years now on it. Or 9 and 1/2, given where we are in calendar when you make your wine. It's actually, if it's well-made, that's good. It's going to have some flavor changes that are going to occur. It'll be a little bit smoother on the palate. But let's just say this was a 2001, and it was an expensive wine. One of the things I'd be doing is, the wine would improve, but what am I doing socially too? Well, let's just say I spent-- this was a 2001, but very high quality, and now it's worth on the market, $500 to $600. Someone's going to pay that for it. Well, what I'm saying by drinking it, and by opening it-- and what makes it better in some ways, is that it's a status symbol. Because what have I done? I've either said I've got 500 bucks that I can spend on the wine, or I've said I bought that wine when it was young, and I spent $70 on it. And I sat on it for that long. That says something about my own patience, my own self-control, and the fact that I can take $70 and simply sit on it and not have it earn anything for me, except for the pleasure of having a wonderful wine when it's older.

So there is something in the flavor of wine, absolutely, that changes over time. Sometimes, for the worse. For better made wines, especially red wines, with greater extraction and greater care, they do often improve. But there's again, there's that cultural and social component where you're making a statement about yourself with the wine. That can be both snobby, and doesn't necessarily add to the taste of the wine.

Ann-Sophie: That’s a pretty comprehensive explanation. Let me just, at least, give an example from white wine. Bringing it back to Riesling, just to say, aged Riesling often has developed a component called TDN, which has this petrol, diesel smell. So it depends really on the wine. It depends what it does to the wine. And so there is no general answer, necessarily. And it's not that somebody poured diesel, rather it's a molecule that has the odor of petrol that develops in there. Or, the odor of what we associate with petrol.

Chad: And it can be quite pronounced in Riesling. And even if you would think you'd never want to actually drink diesel. Sure enough, when you have it, you think to yourself, this is kind of attractive. It can be a very nice flavor in the mouth.

Ann-Sophie: It's almost like body odor. It can be either disgusting if you're in New York in the Metro, and you've got the armpit in front of you. But in certain romantic encounters, it can be nice. Smell depends on context.